When sorting through the electioneering material scattered throughout the Glazebrook-Rylands collection, it became clear that to create an online exhibition of these materials I would first need to select the best examples of their type from amongst the many items, and would then need to separate those chosen items into categories, allowing a researcher to find their way around the items more easily.

After collating a list of suitable items, researching the political issues they referred to, and noting how they used these issues to gain votes, the most useful approach appeared to be separating the items into decades and then showing a wide selection of tactics used within each decade.

Now, I know that these processes may not make for riveting reading, but I wanted to share with you a quick idea of some of the frustrating, but enjoyable, problems of a cataloguer. You might ask, “why enjoyable?” – a strange choice of words perhaps. Well, for anybody who loves history, the challenge of finding meaning in documents, of finding links between documents, of using a seemingly disparate set of documents to build up a picture of a moment in time, is like the joy of gradually completing a crossword, or realising the ‘who-dunnit’ in a murder mystery.

Having told you all of the above, I am aware that I’m at risk (again) of writing far too much without sharing a juicy item from the archives with you. So now is perhaps the time to share another.
Today’s item is one of the earliest I will be using in the online display, being written shortly after the 1832 General Election had been won by the Whigs (a sort of predecessor of the Liberals). The Tories may have only just lost the election, but it is never too soon to start campaigning for the next one! 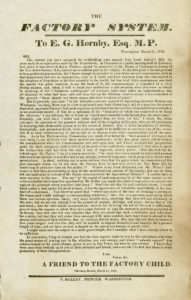 This item may, at first glance, look somewhat dry and boring. Certainly it lacks the instant impact of a poster showing your opponent dressed up as a clown for example, or in modern terms Ed Milliband looking out of the pocket of Alex Salmond. In content, however, it becomes fascinating.

In basic terms, Thomas Kirkland Glazebrook (Conservative party member) has written an open letter to E.G. Hornby (Liberal M.P. for Warrington) condemning him for not supporting the 10 Hour Bill in parliament. The 10 Hour Bill aimed to limit the working day for factory children to 10 hours (there is slightly more to the Bill than that, but the 10 hour day is the main point).

In terms of election campaigns, this seems quite straight forward, condemn your opponent as being cruel to children. The thing that surprised me on reading the poster, and the associated series of open letters that were distributed around town by the two parties, was that we are presented with Tories supporting worker’s rights and Liberal Whigs supporting wealthy mill owners profiting from child labour. This wasn’t the common image of the two parties I had in my mind.

Of course it has to be said that the image of a right wing party saying they represent the hardworking poor and a left wing party saying they can be trusted to keep a stable economy is not exactly unfamiliar to us after the recent election. Perhaps we return to my refrain of “some things never change”. I suppose that if you want new voters, there is no point in campaigning on issues that your party is already known for. To poach voters from the opposition you need to ‘borrow’ their policies. Though it does get a bit odd when they are both borrowing each other’s.

Hornby’s response to the letter by Glazebrook condemning his inaction on the 10 Hour Bill goes some way to explaining the situation. He appears to be somewhat stuck. The Whigs, as a party, have long supported the idea that the state should not interfere in the lives of the people unless absolutely necessary. They had campaigned for many years to end the Corn Laws for example, a set of government regulations that saw the price of bread rise so high that poor people were starving. After campaigning so long against intervention, can they now change tact and say that they only oppose government intervention when they don’t agree with it? Hornby also makes clear that many working class families were reliant upon the income brought in by children to keep them above the poverty line and objected strongly to limits on their child’s working day.

If it had been passed, the bill would have lowered the working day for all children between 13 and 18 to 10 hours instead of 12 (children under 13 were already limited to 9 hour days). There were people who opposed child labour all together, even in the 1830s, but in an increasingly industrial town like Warrington, stopping child labour would not be a vote grabber. Most of the wealthy of Warrington had some stake or other in industry and only the wealthy could vote.

Whichever side you decide to believe, a final point worth bearing in mind is that neither party was objecting to child labour itself, only to the hours that the children were working. T.K. Glazebrook himself, the writer of the letter, owned the Orford Lane Glass Works which employed child labour like most factories in Warrington.

This article was originally posted on Thursday, May 21st, 2015.