Today’s political item is slightly more straightforward than my last blog entry, which talked about child labour in the town’s mills. This time we will look at a simple item, but one that I think is well worth showing – The Black List. This document reminds us just how much the actual technicalities of holding an election have changed over the years (and in this case for the better). 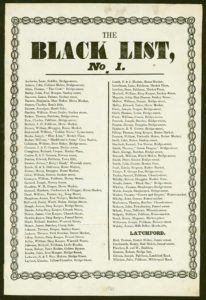 The Black List was a widely distributed list of tradesmen who had voted Tory at the last election. It was issued by the Radicals with the intention that any Radical or Whig supporters should use it to boycott Tory voting tradesmen.

It was not until the Ballot Act of 1872 that voting in elections was a private and confidential process. Up until this date a voter would be listed in a polling book following the election. The Poll Book would list a person’s name, address and which party they had voted for.

Interestingly, it was also considered quite permissible for a man’s employer or landlord to be present whilst he voted.

Whilst theoretically each voter was free to vote for whomsoever they wished, in reality doing so could lose you your home, your job, or both. Freedom to select a party of your choice was in effect limited to the wealthiest of voters.

One other little matter that it is worth noting when looking at this document is the number of publicans on the list. One of the issues I will touch upon in the online gallery of election documents I am creating is the ongoing dispute between the Conservatives and Liberals relating to alcohol. Many important Liberals in Warrington during the 19th Century were abstainers, believing that drink was causing the downfall of society, whilst stalwarts of the Conservative party included the town’s biggest brewing families such as the Greenalls. 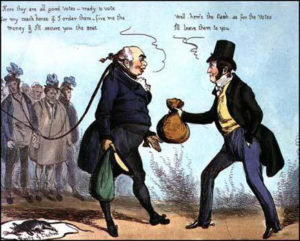 W. Heath’s cartoon “How to Get Made an MP” 1830. The man to the left is stating “Here they are, all good votes – ready to vote for my coach horse if I order them”

This article was originally posted on Wednesday, May 27th, 2015.