Our first picture today reproduces a document rather than a photograph. It shows the front page of a talk given to the Warrington Literary and Philosophical Society in 1887. For many years the Society published a volume of printed transcripts of the talks they had received that year. A large collection of these reports can be read in the Archive Search Room at Warrington Museum and cover a staggering range of subjects.

This particular report was on the subject of “Noxious Vapours that Pollute the Air”, and was written by J. Carter Bell a public analyst (a sort of Health Inspector of his day). As one of his examples during the talk, Bell discussed the attributes of the Sankey Brook, still known today by many residents as the Stinking Brook (though it thankfully no longer warrants the name).

In his broader description of the Warrington area, Bell states that the joyous scenes of gardens, heaths, meadows and orchards have now been “watered with the dews of hell” and that “we have trees stretching their gaunt and withered arms, and pointing to the authors of this scene of destruction, who have made the treeless pastures with the Stygian streams meandering through, upon whose banks are unctuous slime and stony weariness, a very picture of desolation. And the cause of all this weary waste is due to certain noxious vapours, which carry death in their hideous folds, and as they kiss consume. These are belched forth from chimneys far and wide, till the landscape is one veritable Gehenna.”

Bell goes on to describe several differing causes and results of pollution in the area, one of which is the pollution of the Sankey Brook by Sulphuretted Hydrogen. He describes how this is largely caused by vast heaps of alkali waste being dumped along the banks of the brook at St Helens, this waste is then washed into the brook by rain water where it mixes with other pollutants to create sulphuretted hydrogen. This particular pollutant was so objected to because of its smell of rotten eggs.

Bell states that the Sankey Brook has become “pestiferous and pestilential” and that in his opinion it is now “deleterious and prejudicial to the health of those who live in the vicinity”. 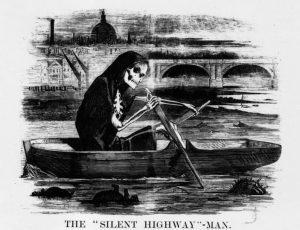 Whilst at this time in history the relationship between pollution and ill health may not have been well explored, we do have a combination of the traditional medical belief in the ‘miasma theory’ of illness being spread by bad smell, and the growth of new ideas showing how microscopic organisms could be spreading disease in drinking water.

Bell sets out a number of simple solutions to the pollution of the Sankey Brook, but also points out that whilst vast sums of money are being made from the industry causing the pollution little change is likely to happen.

Certainly ‘Stinking Brook’ kept its name for many years to come, and with the industrial pollution and the emptying of sewers into the waterway the entire length of its progress, it’s no great wonder. But nature is a survivor and there has always been some wildlife along the brook. In recent years this has been magnified massively and now all manner of both plant and animal life, both in the water and along the banks, can be found.

This article was originally posted on Monday, May 8th, 2017.