This month’s blog post by Collections Assistant Hannah White, is looking at a painting in the collections which receives little attention and is rarely on display, but it tells an important story from the Bible. 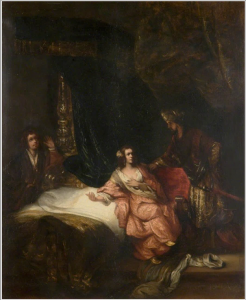 The story of this painting begins well before 1655, when Rembrandt produced it, in fact it goes as far back as 1634. During this year, Rembrandt produced a small etching measuring around 10cm squared which depicted a rather significant story from the Old Testament in the Book of Genesis (39:1-20).

The story starts with the well-known biblical figure Joseph, son of Jacob and Rachel, who is purchased as a slave by an Egyptian officer of the pharaoh, called Potiphar. Out of jealousy, Joseph’s brothers had sold him into slavery in Egypt.

Both etching and painting capture the wife of Potiphar trying to seduce Joseph, who has eluded her advances. Potiphar’s wife was so enraged by Joseph’s refusal by her to lure him into bed, that she grabbed him by his coat, whilst pleading with him to lie with her. We see here the extract from the Book of Genesis describing this event:

“And it happened about this time, that Joseph went into the house to do his business; and there was none of the men of the house there within. And she caught him by his garment, saying, lie with me; and he left his garment in her hand, and fled, and got him out” (Genesis 39:11-12)

But this was not the end of Joseph’s ordeal, he had not escaped unscathed. Potiphar’s wife, clearly spurned, made a false allegation of sexual assault against Joseph, using his coat as so called ‘evidence’ of the supposed act. Innocent Joseph was granted a prison sentence, for a crime that he never committed. As after all, the word of a slave was of little worth against that of his master’s wife.

Joseph certainly had good reasons not to have an affair with Potiphar’s wife, if he had done, this would have been an ultimate abuse of his master’s trust and Joseph believed in the sanctity of marriage. An affair would have gone against all of Joseph’s ethical, moral, and religious principles, those taught to him by his father Jacob. As a slave, Joseph would have been immediately executed by the sexual assault charge. Potiphar’s wife is known to have accused other servants of the same crime in the past. Potiphar believed that Joseph was incapable of such an act and petitioned for the pharaoh to spare his life. But sadly, owing to the class status of Potiphar’s wife,  the punishment could not be avoided.

This same scene has also been depicted in roundels (painted glass) made in Germany in circa 1520 which form part of the Ceramics Collection at the V&A Museum, and similar copies are part of the Royal Collection Trust, the Wallace Collection, the John Paul Getty Museum, and the British Museum.

The original of ‘Joseph and Potiphar’s Wife’ was produced during the 17th century, when Dutch painters reached a level of success that is believed to have no parallel within any other period during the history of art. The period previously before this, was characterised by the Eighty Years’ War (1589-1648), a time of political and religious uncertainty. However, out of these tumultuous years, the Netherlands experienced great economic prosperity, primarily thanks to maritime trade and urbanization. Later the formation of the Dutch Republic brought a flourishing of the arts often referred to as the ‘Dutch Golden Age’ and it was during this so-called ‘Golden Age’ that Rembrandt produced his painting ‘Joseph and Potiphar’s Wife’.

Rembrandt was one of the most important visual artists and possibly the most important in Dutch art history. Religion is a central theme in a large majority of his artworks which may be a result of the religiously fraught external environment within which he was painting. Although neither of Rembrandt’s parents were Christian, Rembrandt himself has been described as having a deep Christian faith. This, it can be assumed, was one of the driving forces behind the subject matter for many of his paintings.

In 1639 Rembrandt, now married to wife Saskia, moved to a new house in an area known today as Jodenbreestraat (‘Jewish Broad Street’), in the centre of Amsterdam. At his new home, Rembrandt used his neighbours to good effect, frequently asking them to model for his paintings which captured the stories of the Old Testament. The story of Joseph fascinated Rembrandt who produced numerous drawings, prints and paintings of the biblical figure.

Within the Fine Art Collections at Warrington Museum and Art Gallery, there is also a copy of Rembrandt’s The Nightwatch. This is one of the most famous paintings of the so-called ‘Dutch Golden Age’. The painting is unique in that it captures the first depiction of figures in a group action portrait including the civic guardsman taking up their positions to march out. Rembrandt’s manipulation of light in the artwork is unprecedented. The original painting was produced in 1642 and is now on display in the Rijksmuseum, Amsterdam.

In his lifetime, Rembrandt produced some 300 etchings, but the depiction of the story of Joseph and Potiphar’s Wife was quite unlike most of the subject matter for his other etchings. This etching was in fact one of only four or five that were classified as being ‘erotica’. The original plate for the etching is in a Private Collection.

So, we have seen how the great Dutch painter Rembrandt was clearly influenced by the religiously tumultuous environment within which he was living, and how his deep Christian faith bled through the chosen narratives of his artworks. Also, Rembrandt was not afraid to push boundaries with regards to the composition and subject matter of his artwork, as evidenced in the original depiction of the group action portrait in The Nightwatch. The painting Joseph and Potiphar’s Wife depicts a biblical story, but sadly one which does not end happily for Rembrandt’s chosen key figure Joseph. However, it does show Joseph in a good light. He is a man of moral and ethical integrity, a message that we can each follow in our daily lives.

Click here to find out more about our marvellous collections!