The Curious Case of Harold Dutton

In this blog article Archives Volunteer Carol Mayo shares a fascinating story she has unearthed in the collections.

The curious case of Harold Dutton is recorded in a surprising source. I became aware of the case during a Zoom talk in April by Philip Jeffs, Warrington Archives and Heritage Officer. The subject of the talk was the project undertaken by the University of the 3rd Age Volunteer Transcribing Group to work through the “Robberies Register 1909 – 1916”.  The large handwritten register lists the crimes recorded by the Warrington Borough Police. The register lists details of robberies but alongside the robberies there are other offences including shoplifting and pick pocketing. Suicide records are included but the details relate to the witnesses rather than the people who committed suicide. 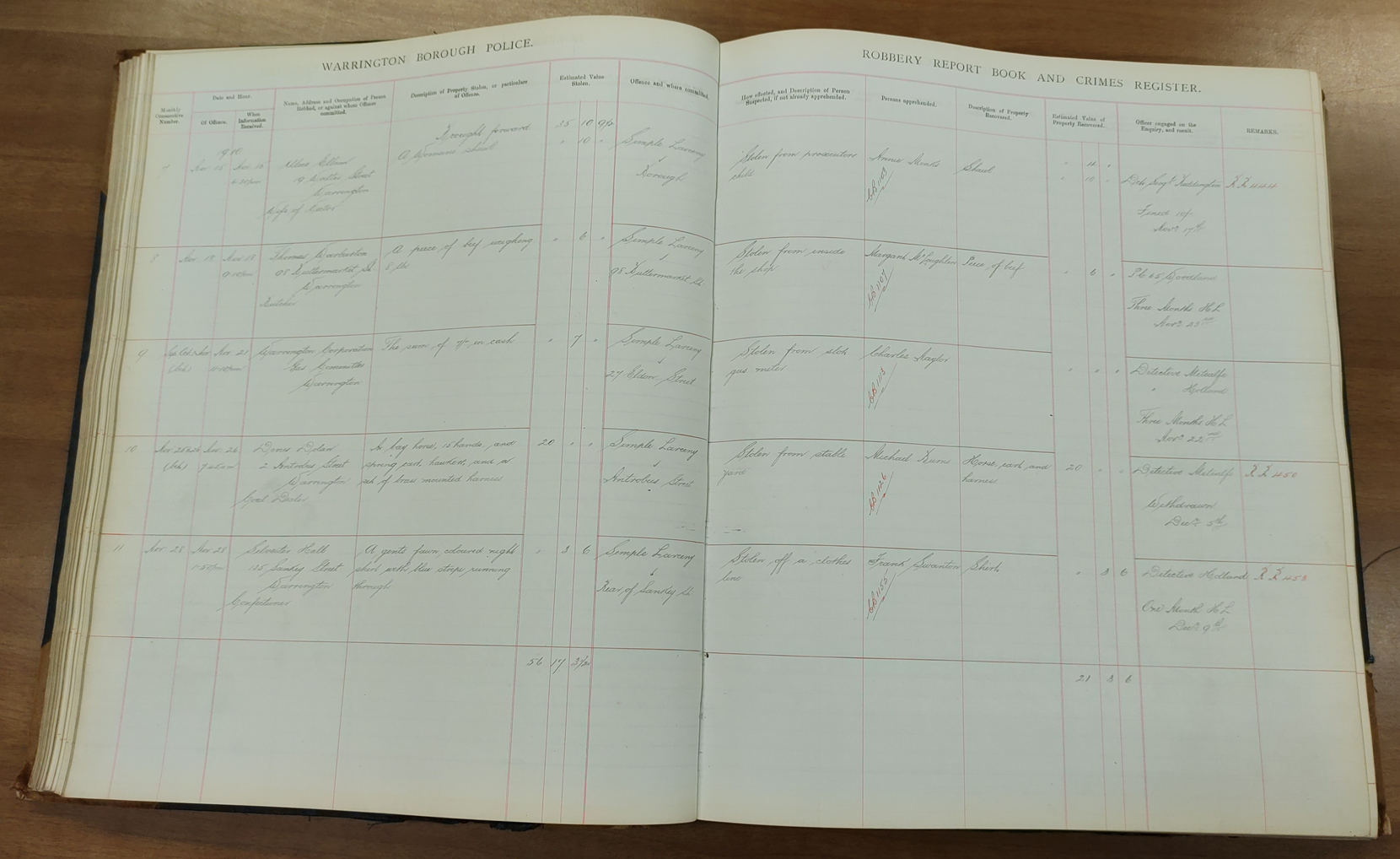 The volunteers worked through all of the hand written entries and transcribed information on over 2100 crimes.  Through their hard work this information is now available to the people of Warrington on the Archive’s Robbery Database. In his talk Philip flagged up some cases and Harold Dutton’s was one of these cases, but Harold’s crime stood out above all the others.

His occupation entry reads “Being a person who had held Office under His Majesty did have retained in his possession a certain document which he had no right to detain.” and his offence was breaking the  “Official Secrets Act 1911 Secs [section]2 (1)”. The officer dealing with him was Detective Sergeant Holland.  The Runcorn Guardian on 24th August 1914 reported the proceedings when Harold Dutton came before presiding magistrate Councillor Peacock and several other magistrates. From his hearing we discover that Harold was young, resided at 71 Victoria Road in Widnes and was charged on 11th August by Detective Holland and Superintendent Williamson in Widnes. At the hearing it was declared that there was an eight day adjournment as the War Office was gathering evidence to put before the Public Prosecutor – Harold was remanded in custody.

His story is intriguing as it prompts many questions: What was the document, how did he access it and why did he keep it, what was his “Office under His Majesty”, why was he in Warrington and who was Harold? To try and answer these questions I decided to search the Online British Newspaper Archive and I was astonished to find that the search “Harold Dutton” produced dozens of newspaper articles. Not only in the localities of Runcorn, Widnes, St Helens and Liverpool but London, Sheffield, Dundee, Belfast, Portsmouth, Leicester, Edinburgh, Aberdeen, Huddersfield – the list continues. Many of the articles report the same basic facts published in the local and national papers. There are however a few which give an insight in to Harold’s life which we will see later.

Before discussing his case it would be useful to know something about Harold’s background. At the time of the 1901 Census his family resided at 37 Wright Street in Widnes. He was born in Widnes, his father Joseph worked as a chemical works labourer and his mother was Hannah. Harold had one sister and five brothers. It is rather fortuitous that his military records have survived. From these we learn that Harold was born in the parish of St Pauls, Widnes on 26th June 1892. He enlisted in the Army Service Corps (A.S.C.) on 26th April 1911 in Warrington when he was almost 19. Harold had worked as a labourer for two years before he joined the army. He enlisted as he said he wanted to “better himself”.  He joined the A.S.C. and worked as a clerk at Portsmouth under Major Hare. The Major held a key role as he was general staff officer whose role was to protect Portsmouth’s defences. Harold continued to serve at Portsmouth until 8th July 1913 when he transferred to another regiment. He left the A.S.C. with an employment sheet which described him as “honest, sober, reliable, clean and hardworking”. He was now a private in the Corps of Lancers of the Line serving in the 16th Queens Lancers at the Curragh Camp. Harold had moved from England over to County Kildare near Dublin. The Curragh Military Camp was built by the British Army as a training camp but what Harold’s role was I am not yet certain. He was in service until June 1914. Looking at his military medical history we discover that he was discharged by the Medical Board as he was described “as permanently unfit”.

The newspapers report that after his discharge he returned to England and found employment as a bar man in Warrington. The reports do not give any details relating to his place of employment or his lodgings in Warrington. We do however discover that Harold had possession of military papers. He decided to show the papers which were marked “SECRET” to a fellow lodger John Barker who thought very little of it at the time. The next day Barker realised their significance. Whilst Harold was absent he took the report from Harold’s jacket pocket and slipped in blank sheets of paper into the envelope. It was Barker who reported him and passed the papers to the Warrington Police. The Police went to his lodgings to question Harold and search the premises. He denied having any military papers, all he had were his discharge papers and a small book. The Police found nothing on the premises.

He was ultimately taken to Warrington Police court in September 1914 and after the police had shown the papers to Harold he admitted his actions – making and keeping a copy of a lecture. At the hearing the police officers gave details of what occurred at the lodgings. On the same day 12th August 1914 as the property search was carried out a young woman had travelled over from Widnes to see Harold. Whilst the Police were there Dutton passed her the envelope, not knowing that now they now contained blank pages. As he passed the envelope he said to her “For God’s sake Cissy keep them for me”. Cissy, in fact Elizabeth Boardman, would have been confused by his actions as she could only see blank papers in the envelope. It was revealed that Harold had possession of the papers for 18 months. During this time he admitted that he had shown them to some of his army colleagues at the Curragh and to John Barker at his lodgings. Harold was hoping for the best as he “didn’t mean any harm”. Harold was to be sent to the next assizes at St George’s Hall Liverpool for trial. Mr Barker was congratulated by the court for his actions.

Harold’s trial took place over Tuesday 27th and Wednesday 28th October 1914 and he pleaded guilty. This was just a few months after war had broken out and this would have added to the seriousness of his actions. Mr Justice Darling presided over the trial and the prosecution led by Mr A.R. Kennedy outlined the case for the prosecution. Harold held a highly trusted position as part of his work was to make copies of secret documents of national importance. His senior officer Major Hare wrote and delivered a lecture on Portsmouth’s schemes of defences which was obviously of national secret and strategic significance. Harold typed the lecture as ordered but decided to make an extra copy for himself. On his move to his new regiment he took this with him. At the trial Harold admitted showing the documents to fellow soldiers but he had described this as a “swank”. He was showing off.

Harold’s defence was submitted by Mr Newman. His case was that Harold made no secret of having the papers and that he did show them to some people but he did not realise the seriousness of his actions. Harold was however a “respectable man” with a good character – as his military records had shown. His defence went on to Harold’s discharge from the Army. This was due to being “physically unfit to serve”. Harold told the doctors that prior to his enlistment with the 16th Lancers he was feeling giddy and had memory lapses. His records also reveal that whilst serving at the Curragh he suffered from depression, could not speak and “unconsciously tried to commit suicide”. I am uncertain what this phrase means but perhaps it was a way of protecting Harold from prosecution, as suicide was a criminal act. Harold was hospitalised for several weeks and on his release from hospital he was told he was no longer fit to serve. His medical records reveal the final opinion of the medical board – he had “true epilepsy” and as a result he was   permanently unfit. It was 50/50 as to whether he was capable of earning a livelihood. After submitting the case for the defence Mr Newman concluded Harold “was not in any sense a spy”.

A further aspect of Harold’s prosecution was the evidence of Sergeant O’Brien who worked in the same office as Harold in the A.S.C. He said documents such as Major Hare’s lecture would be kept under lock and key by the staff officer so there would not be an opportunity to steal the document. The only legitimate reasons for making extra copies was for manoeuvres and field days. There was however “nothing to prevent the typist from making a copy for himself”.  This admission prompted a response from the judge. He asked for these procedures to be put before the Army authorities as the “whole system is wrong and unsafe”. He also hoped the War Office would look in to this too as a matter of urgency.

After reading the newspaper articles and his military records I feel that Harold was a young naïve man who did not have any concept of how his behaviour would be judged. He seems to have regarded the document as a way of impressing those around him. Harold paid a heavy price he was found guilty and sentenced to 6 months hard labour.