The Ethnology Gallery was re-displayed in 2010 to include a selection of objects relating to the art, life and culture of peoples from Ancient Egypt as well as historic artefacts from Africa, Amazonia, Peru, Japan, China, India, Polynesia and Australasia. Many of the objects in these collections were acquired from collectors whilst others were donated by local people who had travelled abroad.

Key objects include the beautifully painted Ancient Egyptian mummy case of  Pa-en-akh-menu, bronze sculptures from Benin and a selection of netsuke from Japan.

The North America Collection includes objects from Native American people including a ferrotype of Native American Chiefs donated by Reverend Philip Pearsall Carpenter. On display in our ‘World Stories’ gallery is an example of a Blackfoot Shirt from North America as well as objects made and used by the Inuit, Aleutian and Inupiat people.

The South America Collection includes examples of objects collected during the 1930s that are representative of several indigenous groups, predominantly the Urubu and Tembe of Brazil. One of the most popular items in this Collection, is a Shrunken Head used for trophy, ritual, or trade purposes. There is also an extensive collection of items from Ancient Peruvian graves, which is largely one single donation of over 300 objects donated by a Mr William Smithies between 1896-1898.  The items were gifted to Warrington Museum and Art Gallery in 1898 and the donation included pottery, domestic objects, and metalwork. It has since become known that there is more of this material in other museums across the North West and even in London.

This collection includes objects from many of the indigenous cultures of Africa such as the Hausa, Ashanti and Yoruba people. There are examples of African weaponry, bead work, sculpture, weaving equipment and decorative dress. Key objects within the African Collection are a selection of Benin Bronzes collected by Henry Lyon who was Assistant Director of the Niger Coast Protectorate at the time of the Punitive Expedition in Benin in 1897. 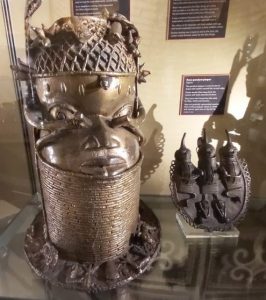 Benin Bronzes on display in our ‘World Stories’ gallery.

Most of the objects within our Asian Collections are from Eastern Asia, or China and Japan. There is a small collection from South Eastern Asia, specifically India and Myanmar (formerly Burma). The Collection includes examples of Japanese weaponry (Tachi and Wakisashi), netsuke, inro, Feejee mermaids, Japanese cloisonné ware and porcelain.

October is Black History Month in the UK, an event that has been celebrated nationwide for over 30 years. Originally founded to recognise the contributions...

October is Black History Month in the UK, an event that has been celebrated nationwide for over 30 years. Originally founded to recognise the contributions...